Home » Blog » Knowing The Risks of an “All Access” Schedule 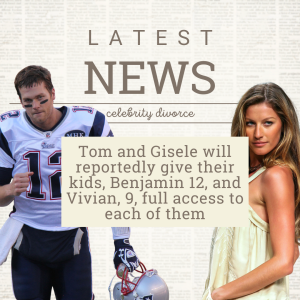 According to “People Magazine,” Tom and Gisele will reportedly give their kids, Benjamin 12, and Vivian, 9, full access to each of them, meaning the children will be able to see mom and see dad whenever they want.
A source who allegedly has knowledge of the arrangement told the publication, “Tom and Gisele will not keep their children from spending time with the other parent. That’s not who either of them are.”
While I understand everybody has a different parenting style and philosophy, Custody Agreements and/or Parenting Plans were designed for a reason. Not only do these documents limit disagreements and conflicts between parents over who gets the kids during the week, on the weekend and holiday breaks, but it also provides the children with familiarity and stability.
In my experience as an AFC (Attorney for Child), Custody Agreements and/or Parenting Plans also limits the conflict and guilt children may feel when the weight of choosing which parent to be with, is put on them. If the parents determine the access schedule, as opposed to the children, and stand united in following the schedule, the children will usually follow suit. Further, it eliminates a parent’s ability to unduly influence a child to stay with her/him by providing incentives such as greater video game use, computer use or screen time on their phones.
While Tom and Gisele’s split appears to be amicable, and they both state they want what is best for their children, a schedule where the children can come and go as they wish comes with risks.
This idea of giving total freedom to the children to determine their own schedule, while well-meaning, may unknowingly create conflict and prevent everyone from developing a routine where the children are able to spend meaningful time with each parent. Since Tom and Gisele have successful careers that require them to travel, a set schedule may allow each parent to plan their calendars and parenting time accordingly.
Example, Tom is required to be on the road a lot for his job with The Tampa Bay Buccaneers and prior to publicly announcing their split, Gisele spoke to Elle magazine where she was quoted as saying, “I have a huge list of things that I want to do… I feel very fulfilled, as a mother and as a wife. And now it’s going to be my turn.” She did. In September, according to The New York Post, the supermodel inked multiple deals to be on the cover of V Magazine, British Vogue, Elle, Perfect and collaborated with a well-known British fashion photographer for the French magazine du Monde.

Again, how is either parent supposed to maintain a work/life/family balance if there is no structure to map everything out with plenty of notice?
Another consideration is the need to have time to oneself. It will become challenging to plan out a vacation or time with friends if either side never knows if the kids are going to call and say they want to come to your home. This can potentially result in a parent being put in the middle of a situation or an uncomfortable position where the entire burden of child rearing constantly falls on them.
Tom and Gisele seem to have done a great job of getting their matters in order in an efficient and effective manner and putting their kids first. However, the question is whether this manner of dealing with one another will last and if is doesn’t, wouldn’t a set access schedule that the parties can utilize keep their cordial relationship on track in the long run.

PrevPreviousLisa Zeiderman on the Legal, Financial, & Custody Implications Kanye West’s Behaviour Could Have on His Divorce Action with Kim Kardashian – An interview with Ilyssa Panitz