Home » Publication » Bored Panda: Husband Lashed Out At His Wife In Front Of His Family For Buying The Cheapest Thing On His Wishlist, Said She Ruined Christmas

Bored Panda: Husband Lashed Out At His Wife In Front Of His Family For Buying The Cheapest Thing On His Wishlist, Said She Ruined Christmas 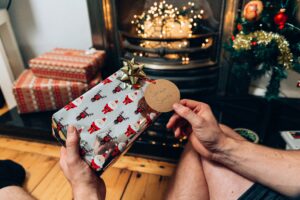 I was quoted in a recent Bored Panda article about financial abuse. A husband lashed out at his wife because she chose the cheapest item on his Christmas wishlist. I give readers tips to gain financial independence in the face of financial abuse:

Lisa Zeiderman, a New York Divorce Attorney, wrote that “controlling the finances can mean not sharing passwords to bank, brokerage, retirement, and credit card account statements, and, or, refusing to share information about income, assets, and debt.”

“Getting one’s finances in order and becoming financially literate can help the victim understand the severity of the situation, how to get help, and ways in which they can achieve financial independence,” Zeiderman explained.

Please read the entire article below. Contact me if you have any specific questions about financial abuse or other family law matters.

Husband Lashed Out At His Wife In Front Of His Family For Buying The Cheapest Thing On His Wishlist, Said She Ruined Christmas

During the holiday season, spending time with our loved ones is more important than receiving something expensive—after all, it should be the thought that counts. Still, some tend to choose things over people, and this story posted on the AITA subreddit shows exactly that.

Fresh-Ad9433 shared how she and her husband got into a huge fight over a gift. This stay-at-home mom is not able to work due to medical problems and relies on her husband for support. However, after receiving $600 from him, she felt pressured to match the present.

On Christmas day, the husband opened a box of brand new sneakers and got extremely disappointed, calling the woman “wasteful and financially irresponsible.” Apparently, $600 was just the right amount for the new gaming console he wanted. The woman turned to the AITA community, asking if she was the jerk in this situation. Read on for the full story.

The husband lashed out at her for getting him the cheapest gift from his wishlist, ended up saying that she “ruined his Christmas” 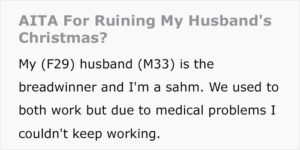 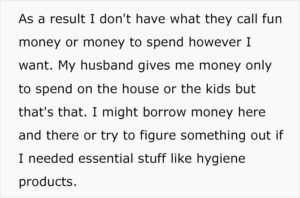 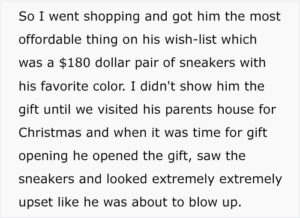 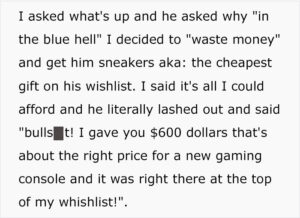 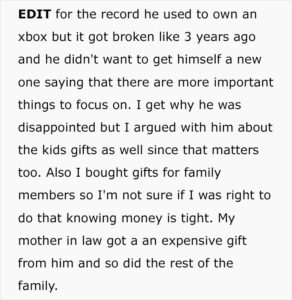 Fresh-Ad9433’s post gained quite a lot of attention. In just one day, it received over 15.9K upvotes and more than 3K comments. Not to mention the conversation it started between the Reddit users.

Many wrote that this is an example of financial and emotional abuse and advised her to run away from her husband for behaving like this. As one redditor wrote, “In a normal relationship where one party is the SAHP, the other party’s income is shared equally. … Under no circumstances should you be left borrowing money for personal hygiene products and clothing.”

When you think about it, the husband’s reaction was really inappropriate. Lashing out, blaming his wife for ruining Christmas and saying “good job screwing up” raises some serious questions. The worst part is, he said all of those things in front of his parents. “It was so so awkward, I felt so horrible I wanted to disappear,” the author wrote.

However, the woman still felt guilty and left an update in the post later on: “I bought gifts for family members so I’m not sure if I was right to do that knowing money is tight.” At the same time, her husband is buying expensive gifts for his mother and adding a $600 console at the top of his wishlist. That does not sound like things are a bit tight for him, does it?

Financial abuse, as defined by the Office on Women’s Health, is when “an abuser has control over finances in a relationship and withholds money from the victim.” In some cases, the victim may even be the breadwinner of the family. Often, it’s hard to leave a controlling partner because of the fear that you will not be able to provide for yourself or your children.

Lisa Zeiderman, a New York Divorce Attorney, wrote that “controlling the finances can mean not sharing passwords to bank, brokerage, retirement, and credit card account statements, and, or, refusing to share information about income, assets, and debt.” This sort of manipulation leaves the spouse or partner feeling vulnerable and trapped in a controlling relationship.

Economic abuse is often thought of as “hidden” because many people that are victims of it may not realize it at first. Although it can come in many different forms, there are a few indicators that show your partner is intimidating you. These include insisting they have access to your bank account, getting a hold of your passwords and refusing to share them with you, using your credit cards or not allowing you to have your own.

Also, not giving you money or insisting you ask for it anytime you need it and making sure that you spend all that you receive from them while they put their savings in an account you have no access to. There are countless ways your partner can make you feel vulnerable and it is important to recognize the signs and gather the courage to take action.

“Getting one’s finances in order and becoming financially literate can help the victim understand the severity of the situation, how to get help, and ways in which they can achieve financial independence,” Zeiderman explained.

Unfortunately, people who practice this type of behavior are not the easiest to deal with. If confronted about this, they deny everything you accuse them of. There are some things you can do. First, talk to someone you trust—it can be a family member, a friend or a therapist. You should not be ashamed of finding yourself in such a situation; it’s important to take the first step.

Next, begin to collect evidence and keep records of every offense you notice. And most importantly, “It is critical to do everything you can to keep yourself and your children safe, and to protect your emotional well-being during this stressful time.” We all have our limits, so when it comes to our mental and physical health, it should be a top priority.

Many Reddit users commented that the author is NTA and had a lot to say about this whole situation. 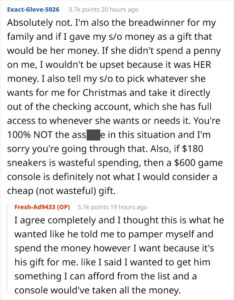 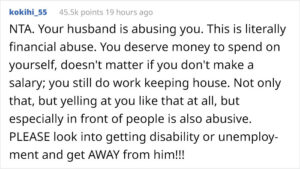 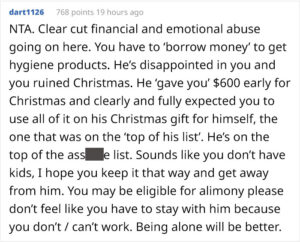